What Choke Is Best For Duck Hunting?

One of the most asked questions is what choke is best for duck hunting. There isn’t a specific answer for this question. There is the most popular choice, which is the modified. However, there might be situations where this wouldn’t be the most appropriate choice.

We’ll dive into that shortly. First, I want to take a second to explain the purpose of a choke. This will help you when you’re trying to make a choice on which to use.

What is a Choke?

The choke you use affects how the pellets in your shell will spread out. This is called their pattern. When attempting to hit a smaller target, you’re going to want quite a bit of tight grouping, meaning pellets traveling closer together towards the same general area. The tighter the constriction of the choke, the more grouping you’ll have. Grouping affects your accuracy and your range.

Best Choice When It Comes to a Choke for Duck Hunting

Now that we’ve covered that, back to the question of which choke would be best. The modified choke has a constriction of .020 of an inch. This causes you to get a grouping of 60% of your pellets into a 30-inch circle from a distance of 40 yards.

You’ll notice throughout this article that each choke will be explained using that same formula: percent of the grouping for X radius at Y distance. Given that the average wing span of a duck is 30 inches, this means you should have a high chance of success if you’re using a modified at the appropriate distance and you adjust your shot correctly, which we’ll cover later on. 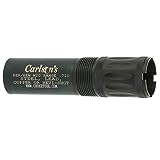 The modified choke is the most popular choice because of its range. It’s sort of the mid point between the different chokes and can be good for short or long distances. Now, earlier I said there might be times when a different choke would be better. Let’s talk about those. There are two other types of chokes that can be used for waterfowl hunting:

A full choke is useful for when you’re attempting to shoot ducks that are in flight. It can reach a longer range of 60 to 65 yards and an accuracy pattern of 70% in a 30 inch radius at 40 yards. This choke will deliver a tighter pattern than a modified choke, which is why it would be more useful if your target is in flight at a further distance.

However, because of the tightness of your grouping, this wouldn’t be ideal to use if the ducks are coming in towards your decoys. This could lead to collateral damage of your decoys from the extra percent of projectiles that aren’t grouped. Who wants to waste that kind of money!

If this situation arises, the optimal choke to use would be an improved cylinder, which would give you 50% in 30 inches at 40 yards. The IC has a constriction of .01, which doesn’t give as much of a tight grouping as a modified or full.

Because only half of your pellets will be grouped together, this means that other half will scatter randomly, reducing the possibility of you injuring the devious sidekicks that lured your prey in. That 50% grouping that does hit the target will provide a satisfactory result at shorter distances, when applied properly.

Now that’s a mouthful. An IM choke has a constriction of 0.025, whereas a regular modified only has a 0.020 inch. You won’t notice much difference between damage inflicted with this choke compared to a full or modified unless you can hit within the range of 45 to 55 yards.

That’s five yards more than the modified. If you’re going for further than 55 yards, you would probably be better off using a full choke. The IM does have a 65% accuracy compared to 60% of the modified choke.

We covered this topic briefly in the first section of this article, but we’re going to cover it a bit more now. There are two types of cylinder chokes: regular and improved. In my book, anything that says improved would always be the better choice but I’m a writer so of course I pay attention to the wording. Haha.

A regular cylinder choke does not provide any constriction, meaning that the propellants will scatter apart when traveling. At a short distance, this would be fine, which is why a regular cylinder is often used for self-defense, as well as shooting buckshot or birdshot loads.

Now, when you’re hunting a small target like a duck, you’re going to watch some type of constriction that way you have a grouping that will actually be effective. If you throw a tiny pebble at a windshield, it might not do any damage. However, if you throw a hundred of the same size pebbles at that windshield, you’ll probably need a new windshield.

One tiny pellet hitting a bird a good distance away might cause a slight injury but it wouldn’t be enough to cause a kill shot. For this, you’ll want a bunch of pellets. That means you’ll want a good grouping, which the IC would provide due to the .01 constriction. Remember, an improved cylinder can give you 50% accuracy in a 30 inch radius at 40 yards.

This chart compare the differences between a modified choke and an improved cylinder choke.

As you can see, there are slight variations between the two, allowing the modified to be slightly superior to the improved cylinder. You get a 10% increase in your grouping success and an extra 10 yard range. Overall, the modified is really the best option if you’re not sure whether your shots will be long or short. This choke will do either.

A full choke is a good choice if you need a larger range and you want a tighter grouping. With the full, you get 70% within 30 inches at 40 yards. I’m kind of starting to feel like a broken record but hey, at least it should be easy to remember! I’d rather fiddle with this kind of math equation any day over my kids’ math homework.

But I digress. The full choke has a range of 55 to 65 yards, which is further than what you would get with that modified. This type of choke is useful for when you’re hunting ducks in flight as you’ll need that extra grouping and range to be able to hit your small, moving target.

So why not always use the full choke? Well think about this. The closer you are to something when you hit it, the more damage the target will sustain. If you’re blasting 70% of your load into a target that’s a short distance away, you run the risk of causing too much damage.

That would mean there wouldn’t be enough meat to harvest nor would you be able to use it for a mount. There’s no point in killing an animal if you don’t intend to make use of it once it’s dead. Whether it’s by eating it or turning it into a trophy.

Never waste your kill. Show respect. If you don’t want to do either, you can often find a program, such as Hunters for the Hungry, that will take the meat as a donation for the homeless. Check with your local wildlife agency to see if there’s a program like this near you.

Where To Aim When Shooting a Duck

In the beginning, I mentioned that to be an effective duck hunter, you have to know how to properly aim. When duck hunting, you might have times when you’re shooting at a duck in flight while other times, you’ll be shooting them as they’re dropping in to land.

There is a different technique you should apply for each situation. Different chokes, different ways of aiming, different patterns of decoy layout (which I will not be covering in this article). There’s so much to remember with this hobby!

When targeting a duck in flight, there’s a few different steps you need to do. Before you start, remember to take it slow. You have to prepare; not just shoot. Your first step should be to aim lower than the duck but still within its flight path.

As you’re looking down your barrel, you wait until your sight blocks the duck out. Then you pull the trigger. So in a nutshell, aim in front of the duck and wait until it gets into the perfect line of sight before you squeeze.

Now, if a duck is dropping in towards the water, you’re going to do a different sequence. This time, you aim towards the duck’s feet. Then pull the trigger when it’s lined up. The reason for this is that by aiming lower, the duck will have moved enough that by the time the projectiles get to your aimed area, it’ll hit meat instead of feet.

Still have a few questions? We included two common questions that hunters with less experience often have!

Can You Use Lead Shot For Duck Hunting?

No. In 1991, a ban was issued by the U. S. Fish and Wildlife Service, preventing hunters from using lead shot when hunting waterfowl.

This was in response to the vast evidence that was presented showing that using lead shot on ducks and other waterfowl led to an estimated two million ducks a year dying from lead ingestion. Lead also left many other ducks vulnerable to fatal diseases like avian cholera.

Since the ban on lead shot for ducks, there aren’t many options for hunters to use. There are currently three types of other shot to pick from:

Is It Illegal To Shoot A Duck On The Water?

It is not technically illegal to shoot a resting duck, from the research I’ve conducted. However, it is frowned upon by many hunters.

Shooting a duck that is not in flight or motion is kind of like shooting a fish in a barrel. There’s not much challenge to it and the duck doesn’t stand a fighting chance. The point of hunting is the thrill of the hunt.

It’s more fun to boast about a story that makes you sound awesome, like the time you shot that duck using a modified choke at 60 yards, (because normally a modified choke doesn’t have that kind of accuracy range) than it would be to point at your mount and say,”I shot that beauty 20 yards from me as it was paddling in the creek with my decoys.” Which story would you prefer to tell?

Can You Hunt For Deer In California With A .223?

Target Shooting: Which is Better? Paper or Steel